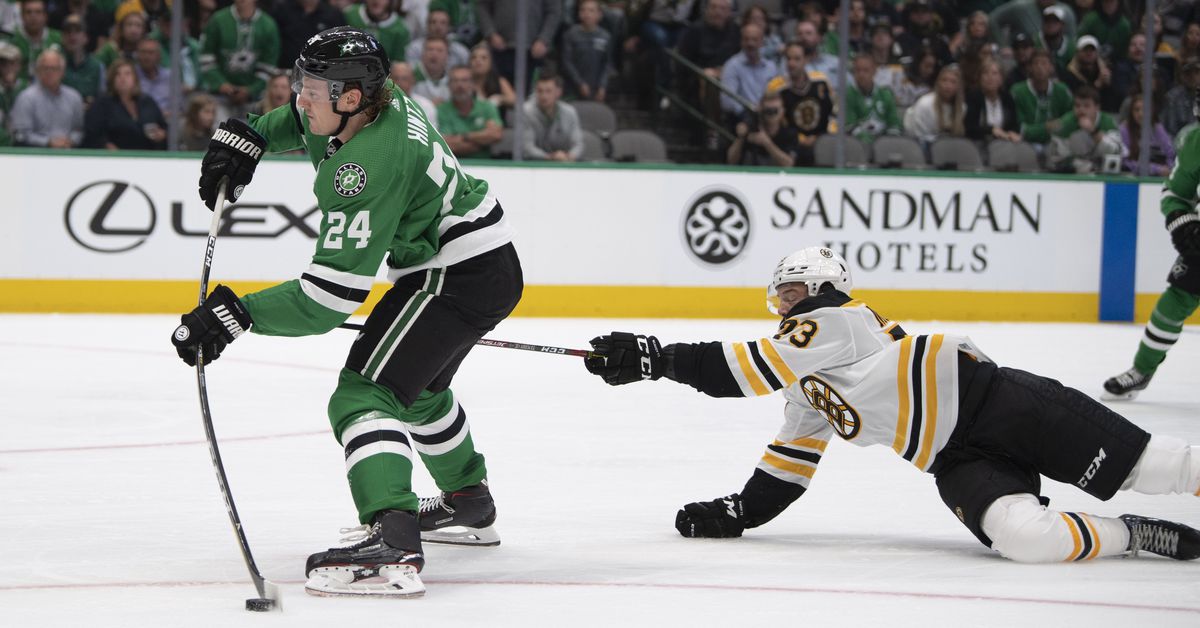 Jerome Miron-USA TODAY Sports Tyler Seguin back in Boston for a Saturday night tilt. What happens to a team that doesn’t score when John Klingberg goes down? It’s a bit early in the season to be expecting to talk about injuries, and certainly disconcerting coming on the heals of last season’s Star parade to IR, but sometimes stories just write themselves. After watching John Klingberg’s Gumby impersonation, while taking a Chris Kreider forearm shiver to the head, there was a sense of impending doom. Klingberg returned after the hit, only to miss the third period with understandable soreness (not sure whether that is Lower Body or Upper Body - but it could easily be both). The Dallas Stars got out to an early lead by activating the defense and skating. It worked so well that the Stars brought out the early second period turtle, turning Ryan Reaves into a viable offensive threat while dehydrating their starting goaltender. Apparently, this isn’t a Stars only phenomenon. Kraken just became the 14th team since 2011 to win a game in which they failed to register a non-empty net shot on goal in the 3rd period pic.twitter.com/TUsT2sbKSb— Dan (@danmorse_) October 15, 2021 All kidding aside, Dallas beat a New York Ranger’s team that woke up after four poor periods of mediocre play to look like the team that will be challenging for a playoff spot by the end of the year. They did it without Jason Robertson, and for the most part, John Klingberg. Both Braden Holtby and Anton Khudobin looked good, with flashes of brilliance. They also did it with a no-show top line. If those numbers reflect an abandonment of a strategy to maintain three scoring lines, it’s not working out. Moving Kiviranta to the left of Seguin and Radulov, with Benn centering the third line, and Faksa moving to fourth line center has potential that needs to be explored in the regular season. Benn with Gurianov works, plus, the fourth line without Faksa was a disaster on ice unless you like endless defensive zone cycles and high danger chances against. Dallas Stars Lineup Dallas didn’t skate as a team on Friday, so this lineup is open to revision after morning skate on Saturday morning. Jamie Benn (14) - Tyler Seguin (91) - Alexander Radulov (47)Jacob Peterson (40) - Roope Hintz (24) - Joe Pavelski (16)Michael Raffl (11) - Radek Faksa (12) - Denis Gurianov (34)Joel Kiviranta (25) - Luke Glendenning (18) - Tanner Kero (64) Esa Lindell (23) - Miro Heiskanen (4)Ryan Suter (20) - Andrej Sekera (5)Joel Hanley (44) - Jani Hakanpaa (2) Braden Holtby (70) Boston Bruins Lineup Brad Marchand (63) - Patrice Bergeron (37) - David Pastrnak (88)Taylor Hall (71) - Charlie Coyle (13) - Craig Smith (12)Jake DeBrusk (74) - Erik Haula (56) - Nick Foligno (17)Trent Frederic (11) - Tomas Nosek (92) - Karson Kuhlman (83) Derek Forbort (28) - Charlie McAvoy (73)Mike Reilly (6) - Brandon Carlo (25)Matt Grzelcyk (48) - Connor Clifton (75) Jeremy Swayman (1) Or, if you prefer: Bruins lines at Friday practice: $6.125M -- $6.875M -- $6.667M$6M -- $5.25M -- $3.1M $3.675M -- $2.375M -- $3.8M $1.05M -- $1.75M -- $725K$750K $3M -- $4.9M* $3M -- $4.1M $3.6875M -- $1M$725M -- $2.75M$925K$5M* $9.5M from 2022-30— Matt Porter (@mattyports) October 15, 2021 The Boston Bruins are neither a defensive juggernaut nor are they particularly deep in the offensive zone. Marchand-Bergeron-Pastrnak are still elite, and the second and third lines have potential, but there is significant reputation over reality. Charlie McAvoy is a top 10 defender, and he just signed a Seth Jones sized contract that should keep him in Boston for his prime playing years. In net, Jeremy Swayman parlayed a 10 game stint straight out of Maine to become the opening night starter. Swayman did beat Jake Oettinger as a freshman, so he likely deserves to be an NHL starter. Boston has an interesting goalie story, so if you didn’t get your fix with the offseason Stars, here’s the short version. Keys to the Game Depth. Dallas mostly played three lines Thursday against New York and with Klingberg likely out, Joel Hanley will need to step in. I’d guess that it will be Hakanpaa who steps up to play with Suter if need be. In any case, the Stars are entering game two of the season with a short and somewhat questionable bench. Meanwhile, Boston is just getting to their opening game. They should be able to roll three lines, but that fourth... Away from the first pair on defense, the Stars should be able to get good looks at Swayman. Skating. More so than previous years, the Stars defense depends on skating and quick passes to get out of the defensive zone. If Dallas sits back against Boston, it will be a long night. Seguin. You know that Boston fans still think he’s a party boy and good riddance. Seguin already knows how to make them pay.