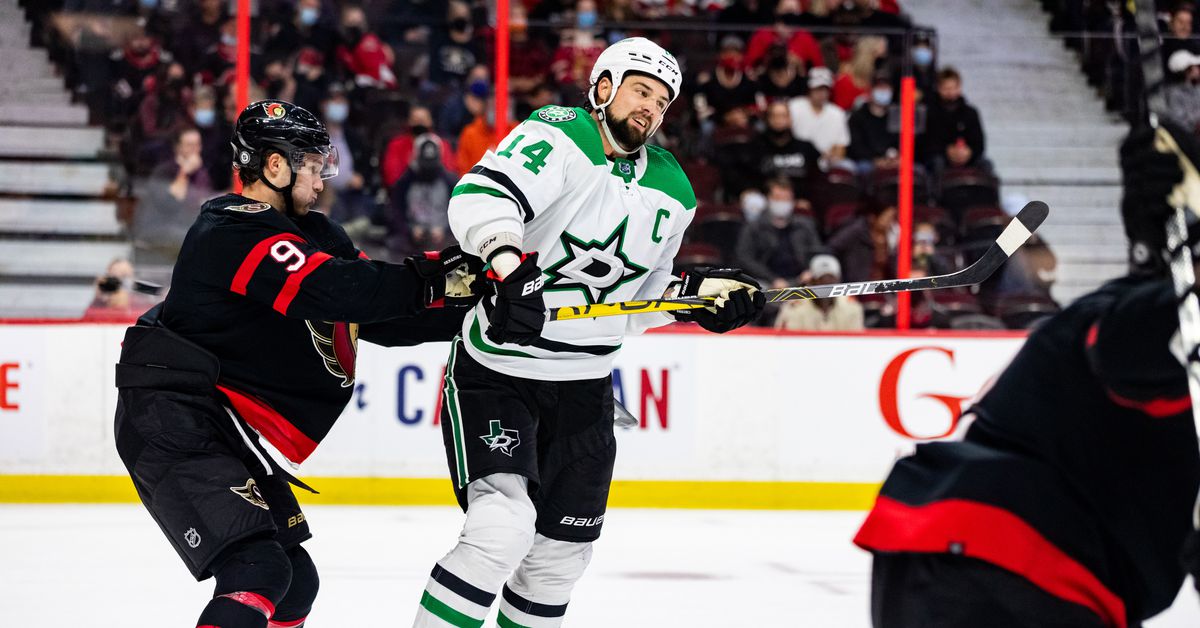 Photo by Richard A. Whittaker/Icon Sportswire via Getty Images If the Stars want to be successful this season, they need their top forwards to step up. Plus, injury updates around the league, overreactions from Week 1, and more. It’s still early, but narratives are already forming three games into the Dallas Stars’ season. At the top is a clear underperformance from the team’s top forwards, and they know it: “We need to be better,” [Jamie] Benn said. “Especially myself. It’s a tough league and your best players have to be your best players, especially on the road.” “Frustrating,” [Tyler] Seguin said. “I don’t think it’s too early to say your best players have to be your best players with our top couple of lines.” Benn and Alexander Radulov have only a single assist in three games, while Seguin has none. Joe Pavelski scored against the Ottawa Senators on Sunday, but has otherwise has also been slow to start the season. Beyond the scoresheet, there is also reason to criticize Benn for taking himself out of the action on Sunday. The team’s captain fought with Josh Brown in a meaningless fight, hurting the Stars for those five minutes: As entertaining as the fight was to watch, it’s irrelevant who won the bout between Benn and Brown because Brown and the Senators won the sequence... if Benn is going to fight just to fight, it needs to at least be in his paygrade and take out somebody from the other team who carries the same weight as Benn does for the Stars. If the best players need to be the best players, they need to play, not sit in the penalty box. You can read more from Saad Yousuf here. Stars Stories Here’s the more optimistic/PR friendly approach from Mike Heika: Heika's Take: Stars take baby steps despite loss to Ottawa https://t.co/prO3Lb3q1v via @NHLdotcom— Mike Heika (@MikeHeika) October 18, 2021 Radek Faksa will have to fork over some cash thanks to his slash on Tim Stützle: Dallas’ Radek Faksa has been fined $5,000, the maximum allowable under the CBA, for Slashing Ottawa’s Tim Stützle.— NHL Player Safety (@NHLPlayerSafety) October 18, 2021 Around the League Nikita Kucherov was injured this weekend, and the early diagnosis is not good: Hearing the initial word on Nikita Kucherov is not positive and surgery could be involved. Assuming that's accurate, I'd expect him to miss some time moving forward, should know more later today #GoBolts #TBLightning— Lightning Insider (@Erik_Erlendsson) October 18, 2021 Meanwhile the Pittsburgh Penguins are waiting for their own star Russian — Evegeni Malkin — to return: Evgeni Malkin resumed skating earlier this month — a significant step in his recovery from offseason knee surgery, multiple NHL and Penguins sources told @Real_RobRossi.More on Malkin's recovery and what comes next ⤵️https://t.co/jZbYGuj5WK— The Athletic NHL (@TheAthleticNHL) October 18, 2021 Okay, last Russian story — Ilya Kovalchuk will be heading to the Olympics... as a General Manager: Ilya Kovalchuk has been named general manager of Russia's Olympic team that is set to vie for gold in Beijing: https://t.co/1aAfTAhF73@mikeystephens81 has more:— The Hockey News (@TheHockeyNews) October 18, 2021 Week one is in the books, so it’s time to overreact to what we’ve seen so far: Connor McDavid is going to score 200 points. The @BuffaloSabres are a playoff team. Jeremy Colliton of @NHLBlackhawks will be the first coach fired.10 overreactions from the start of the 2021-22 NHL season ... or are they?!https://t.co/Qx7eCHqnZ6— Greg Wyshynski (@wyshynski) October 18, 2021 DownGoesBrown also makes his early evaluations with his first Weekend Rankings of the season: We’re back. And as per tradition, we’re back way too early.The NHL season isn’t even a week old, so let’s get to @DownGoesBrown's way-too-early rankings that are going to end up being very wrong ⤵️https://t.co/yef1kwGsHc— The Athletic NHL (@TheAthleticNHL) October 18, 2021 Finally, here’s a deep dive into Seattle Kraken captain Mark Giordano and his path from Russia to ultimately the Emerald City: Mark Giordano was a Flames lifer who took a roundabout route through Russia on his way to the NHL. So, yes, it's strange to be in Seattle – but he's been a stranger in a strange land before.Check out @THNMattLarkin's feature:https://t.co/aJi4GOMIlM— The Hockey News (@TheHockeyNews) October 17, 2021