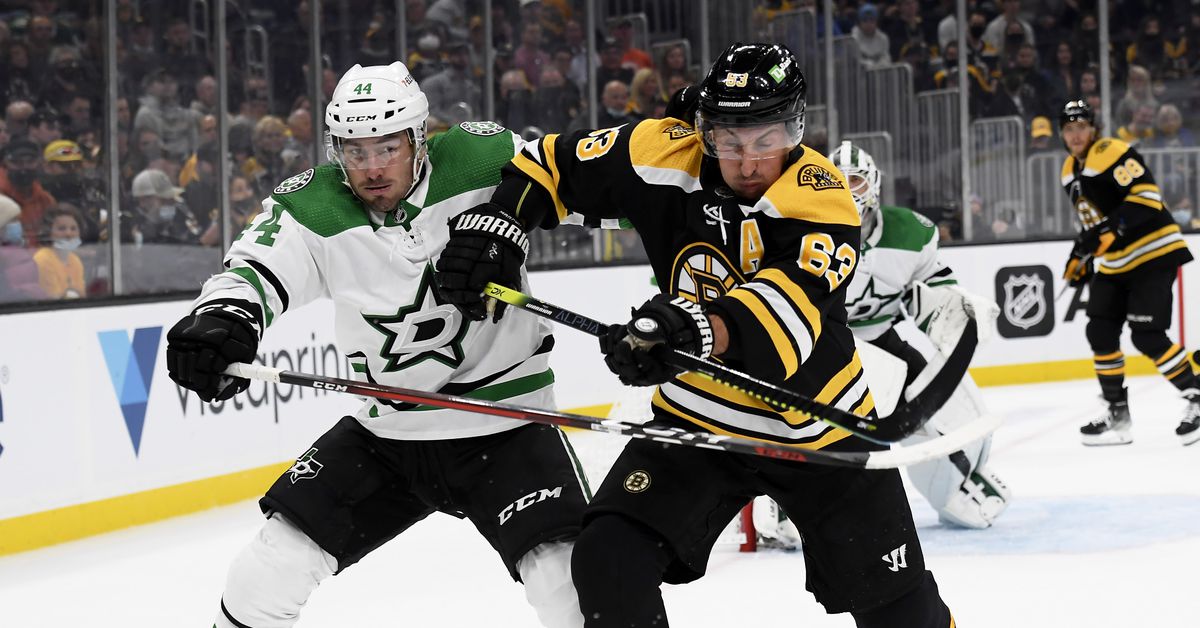 RECAP: Stars Play Not To Lose, Lose To Bruins Anyway, 3-1

This guy again. Sheesh. | Bob DeChiara-USA TODAY Sports Luke Glendening earned the Stars’ only goal as their old, bad habits came back to haunt them. The Dallas Stars went in with no John Klingberg against a Boston Bruins team with no Tuukka Rask. Unfortunately, the Victory Green Gang did bring a few habit that served them poorly last season, and did themselves no favors in the end. Let’s get to that. First Period Well, at least the Stars got that whole “second period against the New York Rangers” out of the way during the first period in TD Garden. It took a pretty heroic effort by Braden Holtby to keep the Bruins off the scoreboard – Boston ultimately outshot the Victory Green Gang 17-5 in the first frame. Dallas had the advantage in face-offs won (53%-47%) as well as blocked shots (8-5) and takeaways (3-2) – but they couldn’t convert when they got the chance. The teams traded turns on the penalty kill, but neither could take advantage of the man advantage. Then Brad Marchand got a penalty shot after Ryan Suter got caught holding his stick on a breakaway. Marchand promptly sank the first goal of the game – and of the Bruins’ season – with less than three minutes left in the period. Bard Marchand (@Bmarch63). Penalty shot. You know the outcome... #NHLFaceOff pic.twitter.com/2RLK1nhFvV— NHL (@NHL) October 17, 2021 ...But did he actually earn that shot? Marchand may have been offside when Suter committed the fateful penalty. I'd to see the high angle one more time if the Bruins were offside on that Marchand breakaway. It was close. #TexasHockey— Brien Rea (@BrienRea) October 16, 2021 Believe it or not, the period could have ended worse. Roope Hintz took a very scary skate to the face seconds later and went down the tunnel. Fortunately for a team already playing without Klingberg, Jason Robertson and Blake Comeau, he would return for the second. Where Roope Hintz got hurt. pic.twitter.com/o5ZefKVHu0— Matthew DeFranks (@MDeFranks) October 16, 2021 Second Period As the second rolled around, the Stars seem to have resolved to keep the puck out of their own end this time. They ended the period with nine shots, but this time the Bruins had only 11. Just over nine minutes in, Luke Glendening must have looked up at the scoreboard and decided it looked lopsided. He picked up a short pass from Tanner Kero and fired one from the slot directly into the back of Jeremy Swayman’s net. It was his first regular-season goal as a Star. That shot's Lukin' pretty good! : @BallySportsSW pic.twitter.com/sqI6VxmW2X— Dallas Stahs (@DallasStars) October 17, 2021 Both teams got two power-play opportunities, but neither was able to do anything about them. The game went to the second intermission with the 1-1 tie intact. Third Period A shots-on-goal imbalance will take away more often than it gives, just saying. Less than five minutes into the third, Jake DeBrusk got the Bruins’ lead back, sneaking one in past Holtby’s blocker. Foligno and Erik Haula earned the helpers. DeBrusk with his first of the year. #NHLBruins pic.twitter.com/ojox7Bjsfk— Northern Lights Sports (@NLightsSports) October 17, 2021 Holtby vacated his goal for the final two minutes as the Stars scrambled for overtime, but leave it to Marchand to win empty-net roulette. Disappointingly, Tyler Seguin didn’t show up against a team he frequently toys with. Surely he’s still working his way back to full game speed, but he could have made a difference at 100 percent. Even more disappointingly, the Stars still look like a team that’s willing to play for OT and hope they can win there. After the 2021 season, you’d think the coaches would just knock that off and set the skaters free. Ah, well, the season is young. Tomorrow it’s the Ottawa Senators, and another chance to grab back that winning record. See you then.