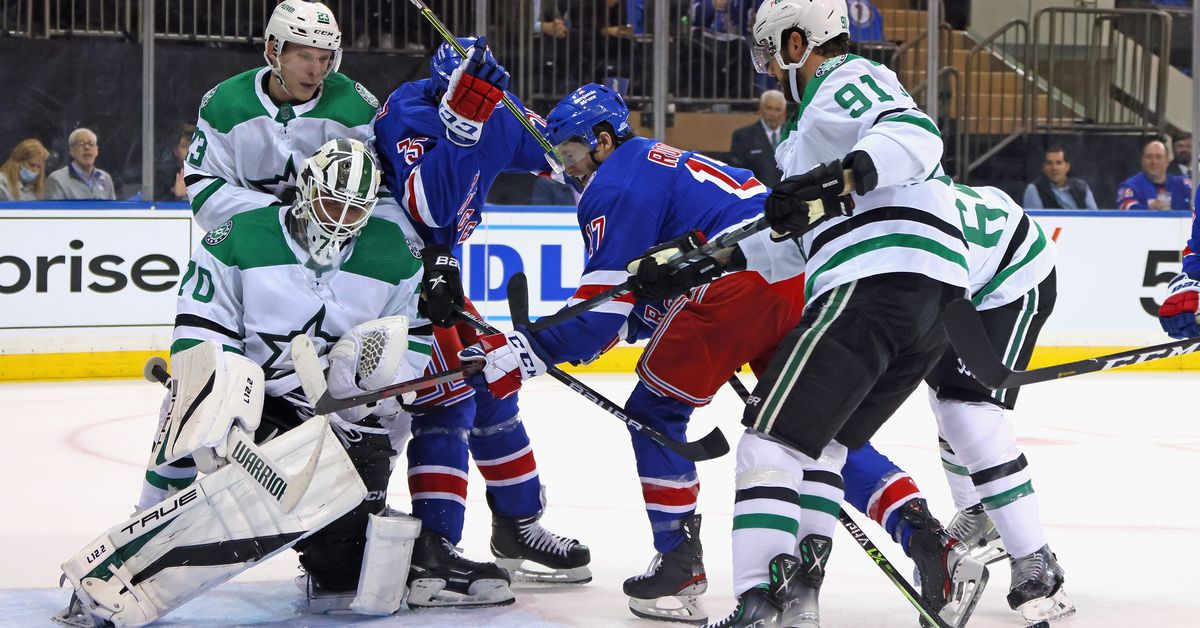 Tabs on Tactics: Why Dallas’ Shell Against New York Almost Cost Them

Braden Holtby keeps Dallas in the game in the Stars season opener on the road versus the New York Rangers. | Photo by Bruce Bennett/Getty Images In their season opener, Dallas tried to lock the game down against the New York Rangers in the second period. Why did a ‘lockdown’ open the game up instead? I’ll try to make this a recurring feature inasmuch as my schedule will allow. With so many storylines to follow, it’s nice to focus on specific plays (good or bad) and tactics that I think are worth highlighting as representing something more meaningful than simply goals, wins, and losses. The Dallas Stars scored a nice win over the New York Rangers this past Thursday thanks to special teams, and the always-brilliant Miro Heiskanen. But the second period, which saw Dallas under fire for a full twenty minutes, nearly ruined their whole day. How did that happen? Shot chart for Dallas @ NYR. Data via Natural Stat Trick On the surface, I don’t think there’s anything wrong philosophically with Bowness’ tactics. If you’re up 2-0, two things happen: even the most risk-happy coaches will suddenly play more conservatively, and the opposing teams will pressure that much harder. So what’s the problem? There’s a difference between locking the game down, and handing the puck over to the opponent on a silver platter. I’ve assembled five clips below (all time-stamped): Quick hits: 0:11 Check out the massive amount of space between the Stars and the Ranger’s point men. Defending to shape is not what most teams do in the modern NHL, and Dallas nearly paid for it. By boxing everyone into the slot area, Ranger defenders had more time to further consider/change their shot selection. 0:29 Not only does a shape-specific defensive tactic leave Dallas open for rebounds, but conceding control of the puck gives NY the ability to start cycling high, as they do here, to break up Dallas’ shell. 1:08 Dallas also got away with what New York didn’t do. It’s easy to see how this play could have been a lot worse if the defender carried the puck toward the middle to isolate Dallas’ F3 (in this case, Radulov) for an odd-man attack with his defensive partner. 1:18 Same as the 0:29 clip. The Rangers easily split apart Dallas’ tree structure with a high cycle, eventually exploiting the empty space in the weakside corner. 1:52 This is just a great play by Norris-winner Adam Fox, but also a great example of what happens when you hand the puck over to great players: like the octopus opening the jar from the inside, they’ll break through given enough time and lack of opposition. It’s also a good example of why playing to shape hurts. When NY adjusts, Dallas adjusts its shape rather than adjusting to the play, and the Rangers nearly generate a high danger chance off a rebound. Structure is important, and we’ve seen part of what makes Dallas effective within that structure, but every structure needs flexibility within it. The Stars gave New York free reign to pass the puck from the point. Preliminary data suggests that preventing passing plays is precisely what keeps goals down in the defensive zone; which makes intuitive sense from a goaltender’s perspective as more movement means more tracking, and thus potential confusion. As for what good defensive zone coverage should look like, here’s Colorado and Carolina’s DZ coverage last season — taken here from Jack Han’s e-book, Hockey Tactics 2021: Defensive zone coverage. Image courtesy of Jack Han. Two things stand out when you watch the clips above in the context of traditional DZ coverage: when the puck was low, there was no F2 to cut off the passes from low to high; when the puck was high, the puck pressure stayed to shape rather than adjusting toward the puck carrier. It’ll be interesting to see how Dallas’ shell evolves, or if it does at all. It’s worth noting that Dallas’ ability to defend a two-goal lead has gotten worse from season to season under Bowness. Will this season be better?