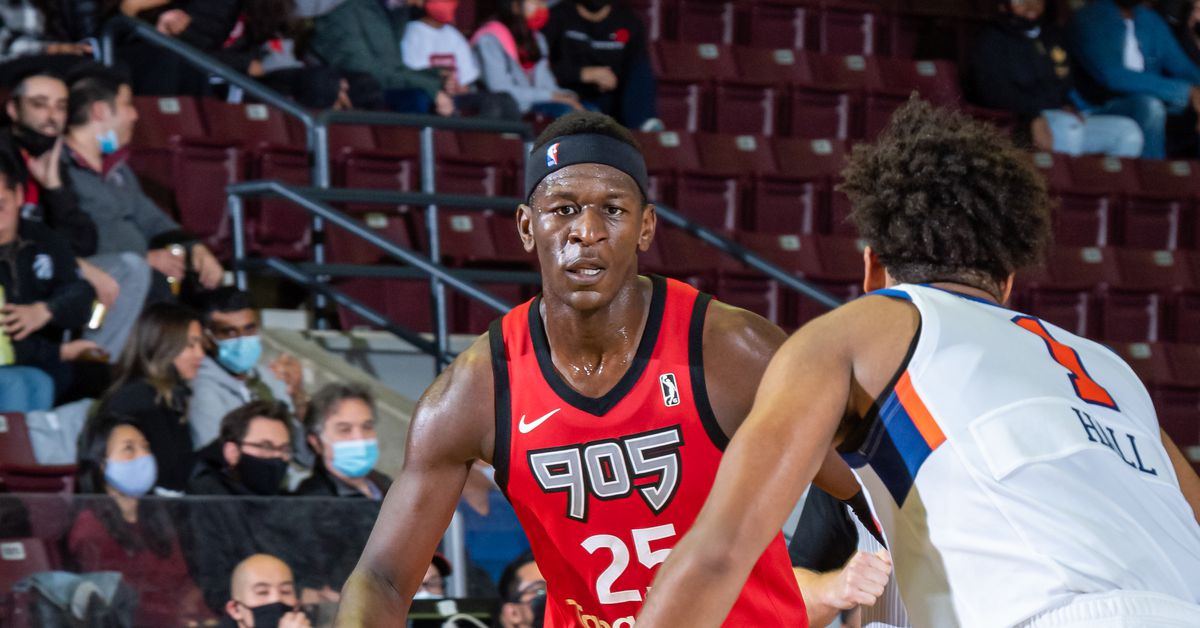 Photo by Christian Bonin/NBAE via Getty Images The Raptors 905 came back to Mississauga with an emphatic win against the Westchester Knicks. On paper, coach Patrick Mutombo’s new iteration of the Raptors 905 team does not have much experience compared to their competition. However, what they showed last night was cohesive play on both ends of the court that you don’t usually expect from an entirely new team playing their first game, blowing out the Westchester Knicks, 119-95. Starters Westchester Knicks: MJ Walker, Aamir Simms, Lydell Elmore, Tyler Hall, Brandon Williams Raptors 905: Kevon Harris, Isaac Bonga, Reggie Perry, David Noel, Obadiah Noel Assignees Westchester Knicks: None Raptors 905: Isaac Bonga (NBA), David Johnson (TW) Isaac Bonga got off to a great start in the first quarter, pouring in 13 points, and pretty much did whatever he wanted against the Knicks’ defense. He would lead all scorers at 21 points while adding nine rebounds, five assists, and two steals, with a game-high +29. The Raptors 905 pretty much put the game away early, even leading by as much as 30 points in the third period. Two-way assignee David Johnson sprinkled his 19 points throughout the game and had a few highlight moments. However, it was Andrew Rowsey, who’s an NBA G League career 43% from behind the arc, that stole the night. Rowsey came off the bench and looked like “Playoff Fred VanVleet,” dropping six three-pointers in nine attempts. Rowsey finished with 22 points for the night. Alex Antetokounmpo was the Raptors 905’s ninth person on their rotation, and he entered the game with the biggest pop of the night at the 9:09 mark in the second quarter. He almost airballed his first attempt from distance, but the jitters were quickly gone, as he found Rowsey for a perimeter shot the next play and got his first points (a three-pointer!) a possession later. .@alex_ante34 for pic.twitter.com/gnQOZlqJVp— Raptors 905 (@Raptors905) November 12, 2021 Reggie Perry looked like a more in-control version of Precious Achiuwa, putting 19 points and nine rebounds as the team’s starting centre. Jawun Evans (16 points, seven assists, three steals) and Kevon Harris looked solid as Raptors 905 returnees, and the newcomer Obadiah Noel double-clutched his way to 13 points last night. For the Knicks, they were without their two-way players Luka Samanic and Jericho Sims last night. Brandon Williams had a quiet 17 points, but it looks like their defense got held up at the border, allowing the Raptors 905 shoot 60.8% from the field, including 45.5% from behind the arc (hey, what are the Raptors 905 doing right and the main club doing wrong?). The game was over when: It was technically a blow-out from the start, but in the third quarter, Bonga faked getting into a DHO and drove for a lefty layup, getting an and-1 pushing the lead to 22. Up Next: Both teams are back at it tonight (Friday), with the Raptors 905 getting even more reinforcement. Cant wait to see y’all tonightIt’s @TangerineHoops Raptors 905 Game Day pic.twitter.com/FTlGvC7m1P— Raptors 905 (@Raptors905) November 12, 2021

Leafs must ride out rough Atlantic