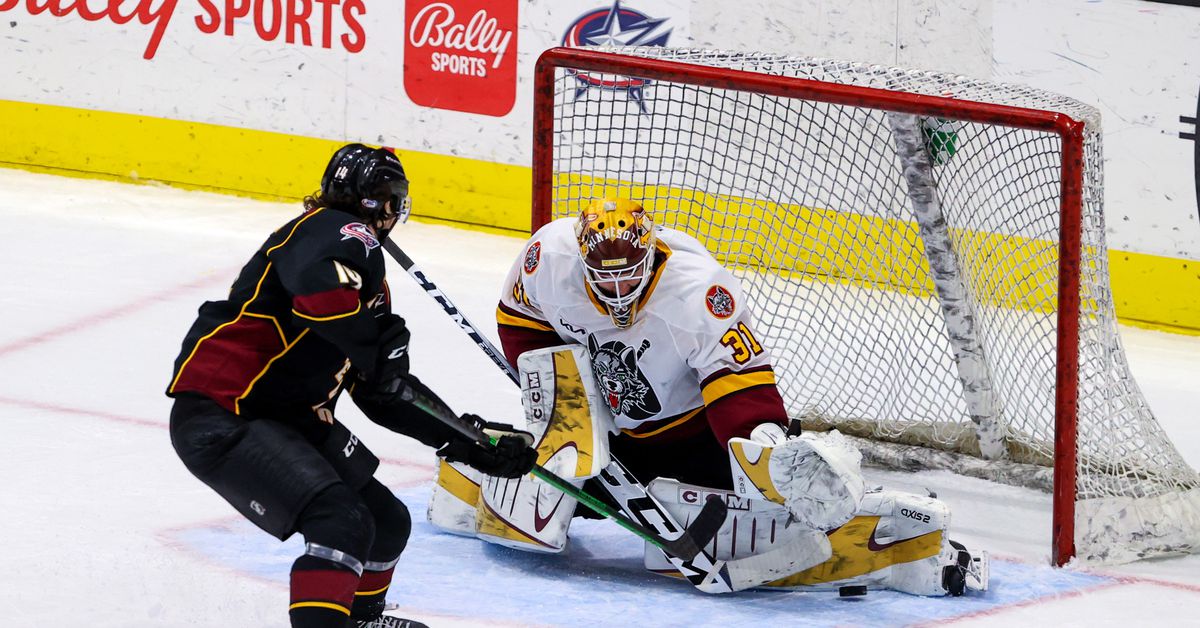 Photo by Frank Jansky/Icon Sportswire via Getty Images At just 24, LaFontaine could be a diamond in the AHL rough Late in the afternoon on Monday, the Syracuse Crunch announced that they had signed goaltender Jack LaFontaine to an AHL contract. With the signing it looks like the Crunch will have three goaltenders battling for the two spots on the roster. Max Lagace is likely the incumbent starter, having re-signed a one-year contract just prior to the opening of free agency. Hugo Alnefelt will likely be his back-up, but the addition of LaFontaine adds a little wrinkle to the plan. As we saw last year, even the best laid goaltending plans can go awry. Lagace was the de facto number one last year as well, but was hurt on opening night in Cleveland (where Syracuse opens this season as well). That led to a duo of rookies Alnefelt and Amir Miftakhov, and as both battled inconsistency and injuries, 4 starts for Corbin Kaczperski and a few eBug situations throughout the season. Not ideal. With Miftakhov back in Russia things were a little thin in the goaltender department, so signing LaFontaine, even if he starts the season in Orlando, helps provide a little security. The 24-year-old from Mississauga had an interesting 2021-22 season. He started it at the University of Minnesota and posted a 2.69 GAA and .900 SV% for the Golden Gophers. He left in the middle of the season to sign a one-year deal with the Carolina Hurricanes, the team that drafted him in the third round in 2016. A big reason that LaFontaine signed in the middle of the season is that the Carolina goaltending depth was in shambles. NHL back-up Antti Raanta was injured as were prospects Eetu Makinnimi and Beck Warm. Five days after signing his NHL contract, LaFontaine was in the Carolina net, mopping up the last 15 minutes in relief of Frederik Andersen in a 6-0 loss. He allowed two goals on three shots in that contest. He would one start with the ‘Canes, a 7-4 loss to the New Jersey Devils where he still managed to make 38 saves. After that he would split time between the Chicago Wolves (AHL) and Norfolk Admirals (ECHL) for the rest of the season. After the season he was an unrestricted free agent, free to sign with any team in the league and the Crunch snapped him up. While his whirlwind rookie year was a bit rocky he does have a pretty good pedigree. In 2020-21 he was the winner of the Mike Richter award as the best regular-season goaltender in the NCAA and a finalist for the Hobey Baker Award. In that season he posted school records for goals against average (1.79) and save percentage (.934). Signing him to an AHL deal gives the Crunch (and Lightning) a chance to see LaFontaine in a less hectic professional season at a relatively low risk. Could he earn another NHL deal with a solid season? Definitely. Alnefelt has some pretty good stretches but was inconsistent (granted he was only 20-years-old) so the back-up spot in Syracuse is there for the taking. Lightning / NHL News Lightning sign Trevor Carrick [Raw Charge] Depth is good. Veteran depth is even better. The Lightning added to their defensive pool of players yesterday with a solid AHL veteran. As we saw last year, a team never knows how deep they’ll have to dig to fill the line-up at points throughout the season. After winding path, Nick Perbix nears doorstep of NHL [Tampa Bay Times] Much like LaFontaine, Perbix had a pretty busy 2021-22. From college to the Olympics to Syracuse the former sixth-round pick was a big surprise for the Crunch last season. He stepped right in and looked like a seasoned pro. Now, he has the chance to make the next step - the NHL. Matthew Tkachuk had himself a press conference [Yahoo Sports] “I hate Edmonton, but I hate Tampa more now.” That’s a money quote right there. Thanks for adding some spice to the Sunshine State Rivalry. Kind of a shame that the first regular season game for the Panthers in Tampa isn’t until December 10th. The boos for Mr. Tkachuck should be quite lustful. Mark Pysyk signed a one-year deal with the Detroit Red Wings this summer. It’s gonna be a while until he makes his debut: pic.twitter.com/gpxOY4Zam7— Detroit Red Wings (@DetroitRedWings) July 25, 2022 The Canadian Women’s National Team released a statement in regards to the debacle Hockey Canada has been embroiled in concerning the 2018 and 2003 Mens’ Junior teams (and who knows what else that hasn’t come to light yet). We are not going to sit quiet. We demand the truth. A statement from the Canadian Women’s National Team. pic.twitter.com/pRieSXhSP3— Erin Ambrose (@ambrose_13) July 25, 2022